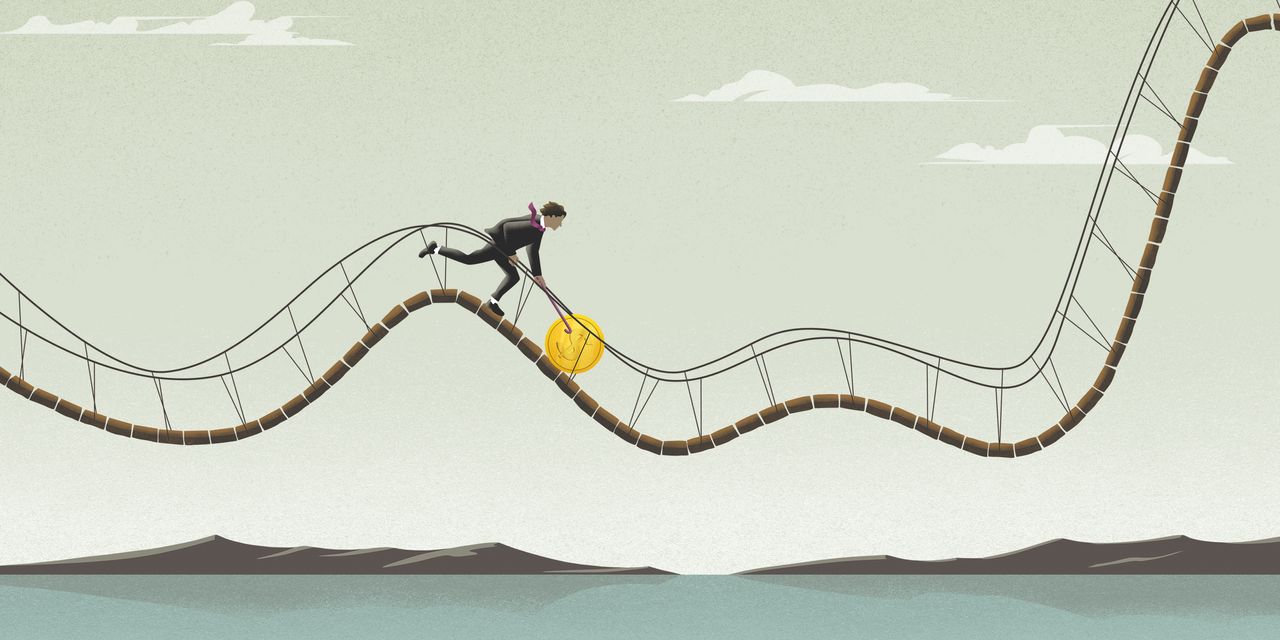 For more than a decade, using market corrections as opportunities to load up on stocks has proved to be a winning strategy. But the recent market carnage, which dragged the S&P 500 index 13% lower from Jan. 3 to Feb. 24, heralds a turning point, according to Patrick Fruzzetti, managing director and partner at Hightower’s Rose Advisors in New York. “This isn’t just a down cycle where you buy the dips,” he says. “The strategy that worked for the past 12 years in a deflationary cycle is going to be very different in an inflationary one.”

Right now, investment advisors have their work cut out for them. For the first time in years, they must navigate a rising interest-rate environment against a backdrop of sustained, elevated inflation and doubts about corporate-earnings durability. Covid-19, which is at the root of the inflation spike, remains a market headwind, while Russia’s invasion of Ukraine adds a fresh dose of uncertainty. At the same time, advisors must persuade clients who have benefited from growth investing or broad indexing that it might be time to tweak the formula.

“We’re going to have a period of more unknowns—about what the Federal Reserve’s going to do, about geopolitical risks, and about corporations’ ability to grow,” says Michael Bollinger, a

advisor in Houston. “We’ve gone from ‘throw the dart and any company you hit went up’ to ‘you’ve got to be very selective and pick the right companies if you want to outperform.’ ”

This environment will test the investing skills of Barron’s Top 1,200 Financial Advisors. Our ranking, which draws from all 50 states plus the District of Columbia, is the largest, most comprehensive of the annual advisor listings that we run. It includes a cross-section of private-wealth advisors, from independents who own and operate their own practices to advisors from the large Wall Street firms.

This special report lists the top advisors in each state, with the number of ranking spots determined by each state’s population and wealth. The rankings are based on assets under management, revenue generated by advisors for their firms, and the quality of the advisors’ practices. Investment performance isn’t an explicit criterion because performance is often a function of each client’s appetite for risk. In evaluating advisors, we examine regulatory records, internal company documents, and 100-plus points of data provided by the advisors themselves.

From early March 2009 to late-December 2021, the S&P 500 rose nearly 600%. The high and broadly shared returns across stocks might not reappear for quite a while, according to Noel Weil, an advisor with Merrill Private Wealth Management in New York. “My experience tells me that while I think we’ll have positive returns, the next decade or so will be a much more difficult environment.”

Many of Weil’s ultrahigh-net-worth clients have been holding large cash balances for years because of low fixed-income yields, and the advisor says that bond selloffs due to rising interest rates present an opportunity to put some of that money to work.

Investors pulled $17.5 billion from bond mutual funds and exchange-traded funds in the first seven weeks of the year, according to Refinitiv Lipper. “Liquidity issues in the fixed-income markets may present us with an opportunity to buy high-quality bonds and extend duration—both on the municipal and corporate-bond sides—as retail investors liquidate their mutual funds and their ETF holdings,” says Weil, this year’s No. 12–ranked advisor in New York.

The pressures that rising rates place on bond funds is a big reason that Valerie Newell, principal at Mariner Wealth Advisors–Cincinnati, buys individual bonds for her clients. “When interest rates go up, and you have an investment in bond funds, your investment actually loses money,” says Newell, the No. 1–ranked advisor in Ohio. “If you have an investment in an individual bond, the market value might go down, but you’re going to get the par value of the bond when it matures.”

Rising inflation and interest rates are problems for stocks, as well. The former raises companies’ input costs, while the latter raises their cost of borrowing, and can make bonds a bit more attractive. Many financial advisors say it’s time to focus less on passive index investing and more on picking individual securities. Bollinger, who placed No. 5 in Texas in the ranking, calls it “probably the best stockpickers’ market that I’ve seen in my career.”

It’s paramount to “stress test” stocks because the market is heavily punishing, or rewarding, companies based on financial performance, he says. Shares of gaming company

(ticker: RBLX), for example, plunged 27% on Feb. 16 after the company missed earnings projections.

Fruzzetti is among those looking for bargains after the market selloff. “We’re getting ready to be opportunistic in the next few months, and maybe more than a few months, maybe the whole year,” he says. “It’s a very different environment.”

Fruzzetti recommends taking a look at investments that were also-rans during the deflationary cycle. Precious metals and energy stocks are examples of assets that can help insulate portfolios against inflation. He’s keeping fixed-income durations short, and he’s wary of index funds that contain erstwhile highfliers. “Passive investing, where you own the largest tech stocks that make up a huge chunk of the S&P 500—if you’re following that model, it’s going to create some pain,” he says.

Weil says the fourth quarter marked the starting point of a “decadelong stretch where I think good active management will outperform many of the main benchmarks like the S&P 500.”

advisor in Chicago who placed No. 4 in Illinois in the Barron’s Top 1200, says shocks like Russia’s invasion of Ukraine are something that investors should always be prepared for. “We share with clients to have a portfolio that is diverse, that’s nimble, that’s liquid,” he says. “And in a world where you have so many changes, active and engaged portfolio management reigns.”

As always, the wealthiest investors have extra latitude in how they play the markets. They can easily access private investments—including hedge funds and private equity—to manage risk and seek greater rewards than are available in public markets. Private investments have lost some of their luster, as public equities have excelled so broadly. Bollinger believes that private equity, in particular, is going to get a fresh look. “As long as there’s volatility and rising interest rates, and as public-market-returns expectations are more muted, then that liquidity premium will go up,” he says.

Beyond private equity, the range of investments available is far broader than it was in the late 1970s and early ’80s, when inflation topped out above 13%, notes Joseph Montgomery, a

advisor in Williamsburg, who placed No. 2 in Virginia in the ranking. Investments like floating-rate bond funds, nontraded real estate investment trusts, and emerging market funds have become more widely available, he says.

“The good news is that everybody today, regardless of how much money you have, can be allocated across a much broader spectrum than you could have years ago.”

Since 2009, stocks have enjoyed a historic and relatively smooth run amid tame inflation and rock-bottom interest rates. As a result, younger advisors are experiencing the most challenging environment in their careers.

“My advice to them,” Weil says, “is to overcommunicate with the client, because many have certainly forgotten what it feels like to lose money.”