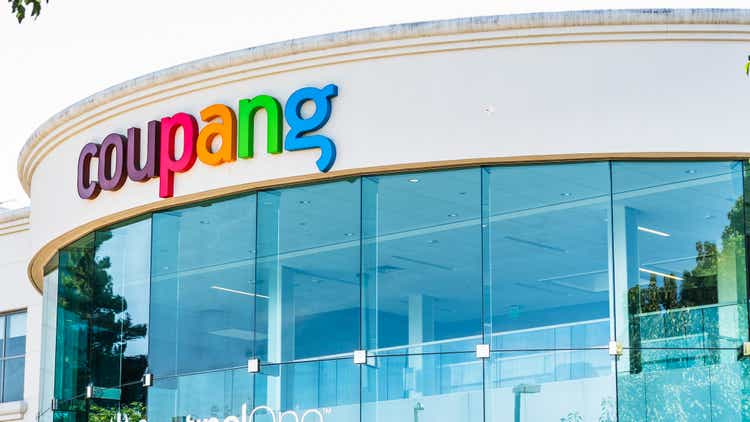 Coupang (NYSE:CPNG) is the largest retail e-commerce company in South Korea, with a market share of 20.01% in 2021. Besides that, based on its prospectus, the company ventured into other revenue segments such as third-party merchant services, where the company charges commissions, advertising, and delivery fees from its merchants. The company has also been involved in other e-commerce businesses such as video streaming services, food delivery, and more.

In this analysis of Coupang, we analyzed its e-commerce business and expect its growth to be driven by increased spending by users and continued user growth. Additionally, we examined its advantage in terms of having a huge user base and high commission structure for third-party merchants, which we believe could continue to lead to the growth of its third-party merchant services segment revenue. Lastly, we analyzed its profitability trend, which has improved since 2018, but we expect it to remain unprofitable in the future as it aggressively expands its logistics network. Using a P/S comparable valuation, we derived a price target for the company based on the industry average ratio of 2.24x.

In 2021, the South Korean retail e-commerce market size was $92 bln according to ecommerceDB. Coupang has the highest market share of 20.01% in 2021 based on transaction volume.

Based on OpenSurvey, the top factors Korean consumers prefer to shop online are due to its good value, the convenience of delivery, and convenient payment with 44.5%, 33.1%, and 24.7%, respectively. In a survey of customer satisfaction of e-commerce platforms by the Korean Consumer Agency, Coupang beat out its competitors with the highest score of 3.85 out of 5 with an efficient delivery service while other competitors scored below 3.8.

In terms of the breadth of its logistics network, in 2020, Coupang had 200 fulfilment centres with approximately 20 mln square feet in Korea. Whereas Naver & CJ Logistics only had 2 fulfilment centres with a total of 57,574 square feet. We believe that with its superior logistics capabilities, Coupang could maintain its advantage over competitors and maintain its high customer satisfaction and attract more users. Moreover, we believe this is further supported with a positive NPS score of 76 for the company.

Its user base grew but at a decreasing rate from 2018 to 2021. From 2022 onwards, we assume its user base to grow at the average decline in growth from 2019 to 2021. We projected its user growth rate to decrease by the 2-year average YoY difference of 4% for 2022 and maintained it constant in the forecast period until 2024.

While its user growth has deteriorated over the past 3 years, its ARPU has been increasing at a 3-year average of 33%. Coupang’s management has mentioned that the company is focusing on customers’ loyalty rather than expanding its customers base.

…less aggressive on customer acquisition this quarter to protect the experience for existing customers, prioritizing what’s best for customers drives loyalty and engagement, and we believe that is the best long-term approach – Gaurav Anand, Chief Financial Officer at Coupang.

As of Q3 2021, the company has mentioned its high revenue growth of third-party merchant services revenue by earning commissions, advertisements, and delivery fees from third-party merchants. As of February 2021, the company has claimed to have more than 200,000 third-party sellers onboard. The management has mentioned the importance of its active customers contributing towards expanding Coupang’s outreach and engagement, providing additional revenues.

We view the number of Active Customers as a key indicator of our potential for growth in total net revenues, the reach of our network, the awareness of our brand, and the engagement of our customers – Q1 2021 Press Release

In this case, with Coupang’s strong user base, we expect the company to continue attracting merchants to this platform as Coupang provides access to a larger user base compared to its competitors. With 17.90 mln users as of 2021, Coupang has a significantly higher number of users compared to selected companies as stated below.

Moreover, Coupang has launched a new initiative to provide new sellers with photography and video studios for free besides providing free online lectures for them according to The Korea Economic Daily. From the partnership with Payoneer, a payment technology company for e-commerce, Coupang opens up payment solutions for international sellers for cross-border businesses. Besides that, as of December 2021, Coupang has currently the highest commission structure at 31.2% implemented to third-party sellers compared to KakaoTalk Gift, SSG.com, GS Shop, and Lotte I Mall.

Taking into account its huge user base and highest commission structure for merchants, we believe this provides it with an advantage and opportunity to attract more sellers to its platform. From 2022 onwards, we expect the third-party merchant services revenue to be less than the 3-year average by 15% through 2024.

Profitability Weighed Down by Logistics Expansion

Coupang has a 3-year average cost of goods sold in % of revenue at 86.11%, and alongside its SG&A expenses at 26.26% of its revenue, the company has not been able to cover its operating costs from the revenue generated. However, the cost of goods sold in % of revenue has been experiencing a 10.72 percentage points decline since 2018. Based on the company’s prospectus, Coupang has mentioned that the majority of its cost of sales comes from product prices, including logistics costs.

Coupang has announced that the company will spend $308 mln on expanding its distribution network. According to Symbia, labour costs are one of the most significant operating costs for warehouses. Besides that, the increasing costs for building supplies could also hike up the operating costs required to build new fulfilment centres. As of Q3 2021, the company has incurred $95 mln into labour and operational costs. With the additional operating costs to sustain its warehouse operations, we believe Coupang could be facing unprofitability with its e-commerce segment.

While the operating margin for Coupang has improved from 2018 to 2021, the company has initiated the expansion of its fulfilment centres, which we believe could jeopardize its profitability. We expect Coupang’s unprofitability to be maintained as the company expands its fulfilments in the future.

Whereas in terms of its FCF, we do not expect the company to generate positive FCFs based on an assumption of CapEx to revenues of 3.4% on a 4-year average.

Coupang has continued to expand its businesses overseas, such as in Japan, Taiwan, and Singapore. From MMD Labo’s survey, Rakuten Ichiba (OTCPK:RKUNY) is the most popular e-commerce site in Japan with 41.4% of respondents indicating it as their main site followed by Amazon at 38.1% and Yahoo Shopping at 13%.

Based on our previous coverage of Rakuten, we believe it has an advantage with a broad product and service portfolio across telecommunications, e-commerce and fintech. 72.3% of Rakuten users were using more than one service in 2019, up from 64.9% in 2017. With the implementation of its rewards program and integrated platform, we believe that it provides a stronger customer loyalty advantage to Rakuten and imposes a headwind to Coupang to compete in the market.

Based on selected retail e-commerce companies, we have obtained an industry average P/S ratio of 2.24x.

In conclusion, our forecast shows Coupang’s forward 3-year average ARPU growth at 9% and user growth at 16% as the company is expected to benefit from the growth of the South Korean e-commerce market with its efficient delivery network. Additionally, we expect Coupang’s third-party merchant services revenue to grow at a 3-year average of 60%, supported by the massive user base along with initiatives such as photography and videography studios and free online lectures, which is expected to continue attracting merchants to the platform. However, we projected the company to remain unprofitable through 2025 as the company expands its logistics network. Overall, the company has been the market leader in the South Korea Retail e-commerce market and still has the potential to grow based on its high revenue growth. Based on our P/S valuation, we rate Coupang as a Strong Buy with a target price of $32.13.