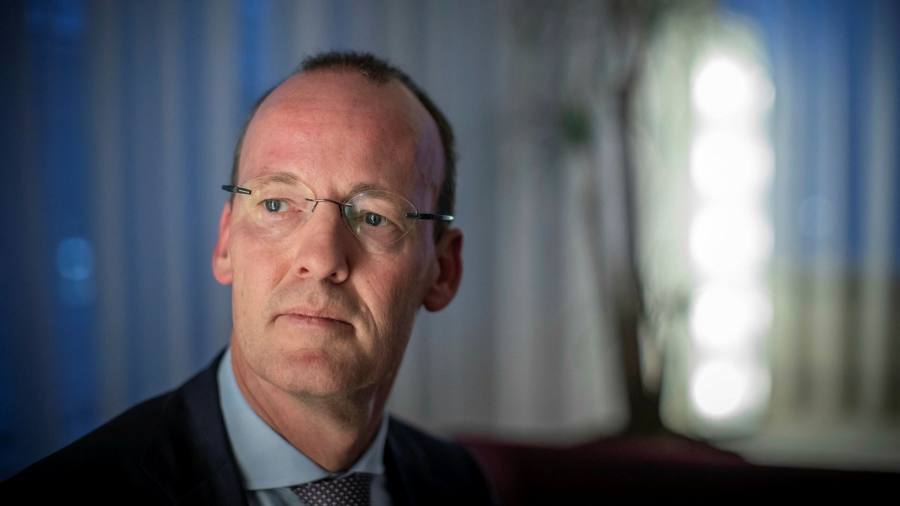 Good morning. This article is an on-site version of our FirstFT newsletter. Sign up to our Asia, Europe/Africa or Americas edition to get it sent straight to your inbox every weekday morning

The chair of the world’s most powerful financial watchdog has called on western leaders to “think twice” before imposing sanctions on Russia, warning that some penalties risked undermining global financial stability.

Klaas Knot, chair of the Financial Stability Board, told the Financial Times that suspending Russia’s access to the Swift international payments system, which underpins trillions of dollars of transactions a year, could result in a “severe disruption in payment flows”.

“When applying severe measures, one should always think twice and also be aware of the consequences” — Klaas Knot

President Vladimir Putin has eased tensions in the crisis and drawn down some Russian troops from border areas to enable “dialogue” with the west while still keeping the threat of invasion hanging over his neighbour.

US and European shares rallied after Putin said he was prepared to hold negotiations if the US and Nato agreed to discuss Moscow’s grievances, including its demand that the transatlantic alliance never admit Ukraine.

Analysts treated with caution Moscow’s latest announcement that it was ready to de-escalate, as Kyiv revealed another round of cyber attacks against government websites and banks.

Washington has disclosed more intelligence about an alleged Russian coup plot for Ukraine, but President Joe Biden reiterated yesterday that there was still “plenty of room for diplomacy”.

Thanks for reading FirstFT Americas. Have feedback on today’s newsletter? Share your thoughts with us at [email protected] — Wai Kwen

Five more stories in the news

2. Argentina’s president struggles to sell IMF deal to a sceptical Congress The country’s agreement with the IMF to restructure $44.5bn in debt is being threatened by a rupture within the government’s own ranks just weeks ahead of a looming deadline for finalising the deal.

3. Eric Schmidt creates $125mn fund for ‘hard problems’ in AI research The former Google chief executive is launching a $125mn philanthropic project to fund artificial intelligence research that solves difficult issues in the field, including issues of bias, harm and misuse, geopolitical conflict and scientific limitations of the technology.

4. Iran calls for US commitment on nuclear deal In an interview with the FT, Iran’s foreign minister Hossein Amirabdollahian sought assurances that Washington would not abandon the nuclear accord as it did under former president Donald Trump, as Tehran proposed that Congress make a “political statement” on the deal.

Nato defence ministers meet The alliance gathers in Brussels for two days to decide whether to deploy troops to south-eastern Europe amid tensions over the Ukraine-Russia border. (Reuters)

1MDB trial A former Goldman Sachs banker at the centre of the multibillion-dollar scandal is expected to take the stand in a New York federal court to testify in the criminal trial of his former colleague, Roger Ng.

EU rule-of-law funding decision The EU’s top court has dismissed Poland and Hungary’s legal challenge to the bloc’s rules, opening the way for Brussels to withhold funding from member states for violations of the rule of law.

France’s dinner for military partners Emmanuel Macron will host France’s military partners in the Sahel at the Elysée Palace on the eve of an EU-Africa summit in Brussels as Paris attempts to reorganise its counter-terrorism operation in west Africa.

Inflation The UK and Canada report January consumer price index data. Economists polled by Reuters forecast Britain’s annual pace of inflation to land at 5.4 per cent, as it did in December, a 30-year record. Stay up to date with our inflation tracker.

What else we’re reading

Inflation tracker: latest figures as countries grapple with rising prices The FT analyses the rise in consumer and house prices globally and assesses how long trends may last.

Unilever’s tea business tests PE’s conscience Workers on a Kenyan tea estate are still seeking medical compensation from the consumer goods group after seven people were killed and 56 women raped in a 2007 attack fuelled by ethnic tensions. Now, CVC’s $4.5bn deal to buy brands such as PG Tips means it will also be responsible for plantations in Africa.

Citi’s Jane Fraser ditches big league dreams Citigroup has conceded its ambition of becoming a top-three Wall Street investment bank in order to focus on businesses that offer growth opportunities while being less capital intensive. But making the case for the strategy will put its chief executive’s communication skills to the test.

BP’s bruised but buoyant ‘worrier’ chief Shortly after taking the helm, Bernard Looney’s plan to turn the 112-year-old oil major into an integrated energy company stalled and its shares fell to a 25-year low. But Looney is still optimistic, if a little chastened from his bruising introduction.

Why the infancy of NFTs may last a long time Measured in financial terms, the market looks big: about $24bn worth of non-fungible tokens have been traded to date. But when you count users instead of dollars, the industry is tiny, writes the FT’s global tech correspondent Tim Bradshaw.

Nine of the best fitness trackers

Check out these wearables for every kind of workout.

Thank you for reading and remember you can add FirstFT to myFT. You can also elect to receive a FirstFT push notification every morning on the app. For more of the Financial Times, follow us on Twitter @financialtimes.

Recommended newsletters for you

FT Asset Management — The inside story on the movers and shakers behind a multitrillion-dollar industry. Sign up here.

The Week Ahead — Start every week with a preview of what’s on the agenda. Sign up here.