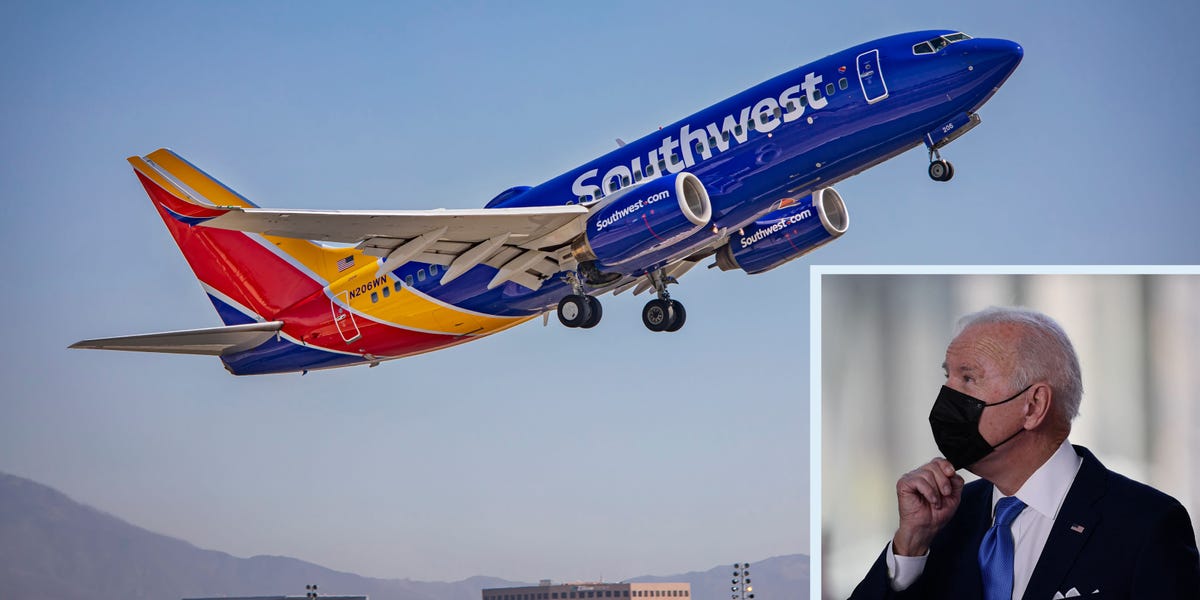 A Southwest Airlines flight on Saturday turned political when one of its pilots finished an announcement to passengers with “Let’s Go, Brandon,” a chant used to insult President Joe Biden.

“On Friday morning on a Southwest flight from Houston to Albuquerque, the pilot signed off his greeting over the public address system with the phrase, to audible gasps from some passengers,” AP’s Colleen Long wrote in an article published on Saturday.

Long was a passenger onboard the flight for a vacation, she explained in a Twitter thread, and was almost removed from the aircraft after unsuccessfully trying to get the pilot to comment for her story on the topic.

“Also in defense of airline [sic] I was asking them to open locked cock pit [sic] and probably sounded insane!” she wrote in a follow-up tweet.

Additional information about the specific flight is unknown. When asked for comment, Southwest told Long and Insider: “The Southwest Team takes pride in providing a welcoming, comfortable, and respectful environment for the millions of Customers who fly with the airline each year and behavior from any individual that is divisive or offensive is not condoned.”

The phrase “Let’s Go, Brandon” has been a rallying cry of the right to secretly bash the president. Its origins can be traced to a NASCAR event during which NBC Sports reporter Kelli Stavast mistakenly identified chants from a crowd to be saying “Let’s Go, Brandon,” when they were actually saying “Fuck Joe Biden.”

In Arizona, a Marine veteran that was being honored by the Yuma County Sheriff’s Office wore a shirt to his ceremony that stated “Let’s Go, Brandon,” and was interviewed by local news with it on. Conservative commentators have also resorted to calling the president by the nickname “Brandon” instead of his true name.

Southwest did not cancel any flights between Houston and Albuquerque on Friday, indicating that Long’s flight progressed as planned despite the incident.

Southwest has been unwillingly roped into the culture war at the heart of the “Let’s Go, Brandon” debate, stemming back to Columbus Day Weekend when thousands of flights were canceled due to extreme weather and air traffic control issues. Prominent conservatives argued that pilots were resisting President Joe Biden’s vaccine mandate that affected Southwest, in its role as a federal contractor.

Conservatives ranging from Texas Sen. Ted Cruz to the Daily Wire’s Ben Shapiro have echoed the talking point. But the airline and its pilot union have said that vaccine protests did not play any role in the cancellations.

CEO Gary Kelly has said that the airline won’t fire any unvaccinated workers that don’t comply with the mandate, or place them on unpaid leave. Southwest set a November 24 deadline to submit proof of vaccination or an exemption request in order to meet a December 8 deadline set by the Biden administration for contractors of the federal government.