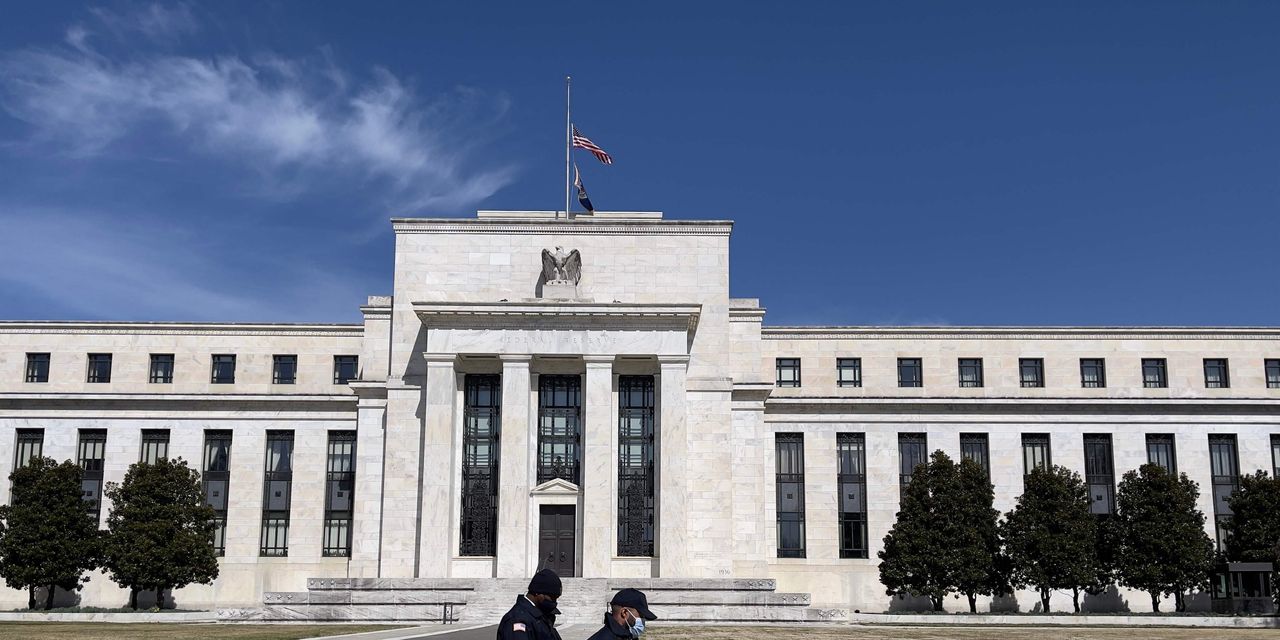 What happened in markets?

On Wednesday, stocks gave up gains during Powell’s news conference to end mostly lower, with the Dow falling 0.4% and the S&P 500 shedding 0.2%, while the Nasdaq Composite eked out a tiny gain.

A strong day for stocks ended with all three indexes in the red, landing the S&P 500 barely above its 4,316.905 correction territory, or a fall of at least 10% from its last record close. The Russell 2000
RUT
was less lucky, entering its first bear market since March 9, 2020, according to Dow Jones data.

That pullback has the Dow, S&P 500 and Russell 2000 on pace for their worst months since March 2020, while the Nasdaq was sliding closer to its worst month since October 2008, according to the data.

“Today’s stock market rally did not last as corporate America reminded us that supply chain troubles persist, and profit forecasts are not providing any reasons to be optimistic,” Edward Moya, OANDA’s senior market analyst, wrote in a note.

But there was some good macro data to start the day.

The U.S. economy sped up toward the end of 2021 before omicron’s surge, growing at an annual rate of 6.9% in the fourth quarter as consumers spent more and businesses stocked back up. Economists polled by The Wall Street Journal had forecast gross domestic product to rise by 5.5% in the fourth quarter after a slower 2.3% annualized pace in the third quarter.

While strong economic data could fuel expectations that the Fed will be more aggressive in tightening policy, economists noted that inventory gains were a key driver, without which the economy would have expanded at just a 1.9% pace.

“The silver lining in today’s report is that the supply side of the economy is starting to catch up to demand, as evidenced by the large inventory build in Q4,” wrote economists Aneta Markowska and Thomas Simons at Jefferies. “Although inventory levels are still low, they have clearly inflected, which should begin to take pressure off inflation fairly soon.”

Investors also continued to wrestle with the outlook for interest rates and other aspects of monetary policy after the Fed concluded its first policy meeting of the year on Wednesday. While the statement from the Federal Open Market Committee didn’t surprise investors, the tone of Powell’s comments in his subsequent news conference did.

“Many traders are still processing what happened yesterday with the Fed and the reality is that they missed an opportunity,” Moya wrote in his Thursday note.

The central bank chief didn’t reject the notion that the Fed could hike at each of its meetings this year, and talked of the need to be “nimble.” He also said there was “quite a bit of room to raise rates without hurting jobs.”

Seema Shah, chief strategist at Principal Global Investors, called that remark about the ability to lift rates without hurting the jobs market a “real kick to market teeth.”

Fed-funds futures on Thursday showed the chances of the Federal Reserve delivering five 25-basis-point rate hikes by year-end had risen to nearly 33% from 22% Tuesday, according to the CME FedWatch Tool.

Powell also refused to rule out the prospect of half a percentage point, rather than quarter-point, increases in rates over the course of the hiking cycle.

The yield on the 2-year Treasury
BX:TMUBMUSD02Y,
surged 10.1 basis points Thursday to 1.190%, its biggest daily yield climb since March 10, 2020, according to Dow Jones Market Data.

He said fed-funds futures for the end of 2022 are up a bit more than that, which could mean that the yields could reverse in the next few days.

In other U.S. data, orders for durable goods fell a larger-than-expected 0.9% in December, while initial claims for U.S. unemployment benefits fell by 30,000 last week to 260,000, signaling that disruptions in the labor market tied to omicron are starting to fade.

Pending home sales dropped 3.8% in December, according to the monthly index released by the National Association of Realtors.

Investors were also reacting to a deluge of earnings, while Apple Inc.
AAPL
was due to deliver results after the closing bell.

How other assets performed