Coachella and the Business of Festival Fashion Is Back 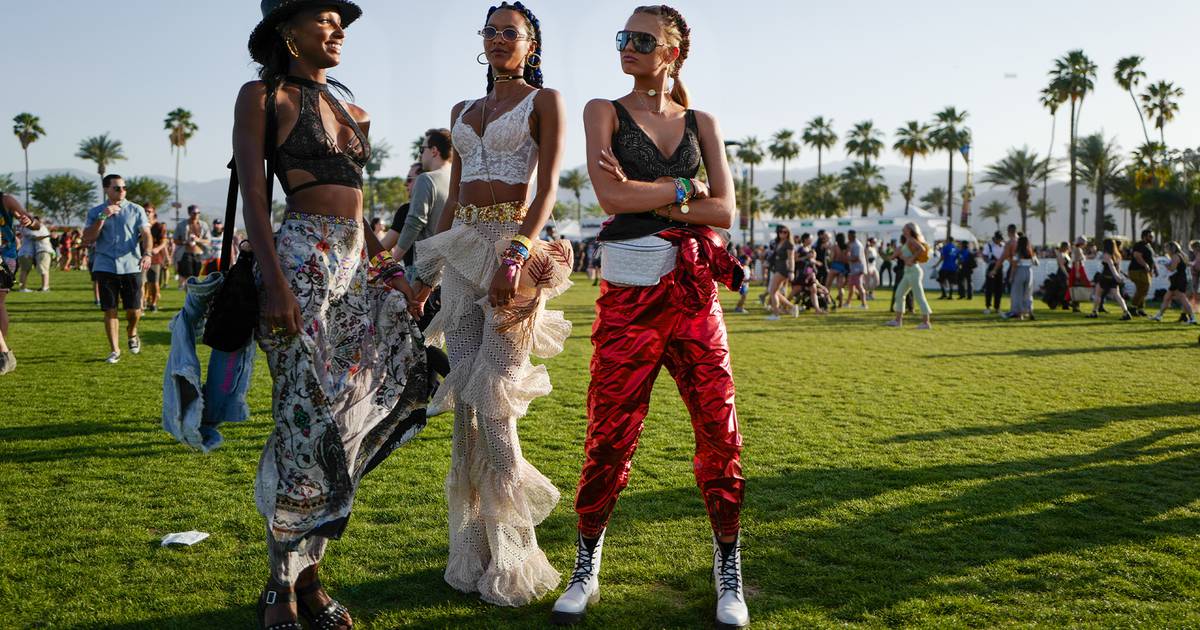 After a two-year hiatus during the pandemic, Coachella is expected to welcome over 150,000 music fans on each of its four days. Hugo Boss will be there to greet them.

This weekend, the German label’s Gen Z-targeted offshoot HUGO is partnering with Soho House on a party house a few miles from the festival grounds. Dubbed Hugo x Soho Desert House, ticketed guests will enjoy unlimited food and drinks and live performances, set against the backdrop of an enormous HUGO sunglasses art installation.

Up the road in Palm Springs, the sub-brand is also opening a four-day “hype house” for TikTok stars, who will lounge on branded furniture wearing HUGO clothes, swim in a HUGO-branded pool, and party with fellow TikTok creators while creating HUGO content.

HUGO’s party houses are among the more elaborate — but far from the only — brand activations awaiting Coachella ticket holders when they stream through the gates for the first time since 2019. Brands specialising in off-the-shoulder tops, lacey bralettes and other festival-friendly gear have generated, for the better part of two decades, big sales from the hundreds of thousands of attendees at the California gathering, plus other music festivals, including Bonnaroo in Manchester, Tenn., Lollapalooza in Chicago, Ill., Glastonbury in England, and Summer Sonic in Japan.

But the real target is often the much larger audience watching from home. Big music festivals produce a torrent of content for social media, and what influencers are wearing at Coachella can quickly become a big seller in stores worldwide. Brands see sponsoring the right event, or throwing a good party, as the key to ensuring their clothes and logo appear in as much of that content as possible.

“It’s a part of creating the party vibe and getting the HUGO tribe all together and welcoming people into the brand,” said Miah Sullivan, the brand’s senior vice president of global marketing and brand communications. “You won’t be able to miss this on TikTok.”

This year, the Neon Carnival, one of Coachella’s hottest parties, will feature a Levi’s-branded ferris wheel. StockX will be putting up art installations at Coachella while PrettyLittleThing is sponsoring several parties with Tao Group Hospitality.

Retailers without an on-site presence are piling on too: Bloomingdale’s has a festival fashion page on its website promoting Staud smock tops, Dior visors and Marc Jacobs cross-body bags while Free People’s festival edit includes disco bras and fringe kimonos. Fast-fashion brands like Shein and Lulu’s promise an endless assortment and on the sites of Boohoo, H&M, Asos, and Nasty Gal, brands have added 173 percent more festival apparel options this year versus 2019, said Avery Faigen, a womenswear analyst with data firm Edited.

No retailer has done more to associate itself with festival fashion than Revolve. The influencer favourite turned fringe tube tops and denim cutoffs into a nearly $900-million-a-year business. While the company pivoted to loungewear and athleisure during the pandemic, it’s back in full force this year with its Revolve Festival. The private pool party and nightclub includes cocktails featuring Kendall Jenner’s 818 Tequila, an ice cream truck from Good American, and two days of performances.

Revolve sees Coachella as the kick-off to a lucrative season, where shoppers are turning to festival trends for spring break and summer vacations.

Coachella, which held its first event in 1999, is synonymous with bohemian clothes and hippie looks that harken back to Woodstock, as well as giant headpieces, body paint and other over-the-top looks. Festival fashion has stirred up plenty of controversies, with images of attendees wearing feathered headpieces, dashikis and bindis regularly sparking charges of cultural appropriation.

Cult Gaia, the LA label from founder and creative director Jasmin Larian Hekmat, was built off of its Coachella presence, where the company sold flower crowns before extending into novelty handbags, footwear, and cut-out dresses.

“You create memories at festivals and you’re always going to remember the brand you were wearing,” Larian Hekmat said. “So it’s a great way to weave out a bit of real estate in people’s minds.”

The style this year will shift to sexier dressing and neon colours, said Reid. She attributed the vibe to a post-pandemic desire to dress sexier, as well as the current obsession with styles from the early 2000s.

“Cut-outs are going to be a bigger thing, as well as saturated and electric colours, like shocking greens and bright oranges,” Reid said.

Larian Hekmat said brands should focus on special designs that will make customers stand out on Instagram or TikTok. Cult Gaia recently debuted a collection with Bratz timed to festival season, including a $500 hand-beaded butterfly top, which she knew would be appealing enough for festival wearers.

“For Coachella, or any festival, it’s about feeling fun and happy about your look, and [shoppers] want something that not everybody else is wearing,” said Welch.

As Coachella expands into its third decade, brands should also be mindful that festival crowds contain music fans who aren’t just Gen Z.

“There’s definitely another market of people who are going — managers, publicists, event planners — who are trying to figure out what to wear, and it isn’t a flower crown,” said Reid. She recommended brands design festival styles that are still fun and comfortable but aren’t necessarily as wild as the classic festival clothes.

PrettyLittleThing will be using its presence at Coachella and at the UK’s We Are FSTVL later this summer to boost its beauty business, said Amy Simon, the company’s global head of PR and talent. The company will have a branded lounge and will be handing out beauty samples for its in-house labels.

Marketers say smaller brands can reach still consumers without building a ferris wheel or holding VIP parties with expensive influencers as guests. In addition to the festival itself, there’s also the “Nochella” scene, where people flock to Southern California for parties but don’t actually go to Coachella.

“You don’t need Drake at your house, you just need to do something cool and fun,” said Vic Drabicky, founder of digital marketing agency January Digital.