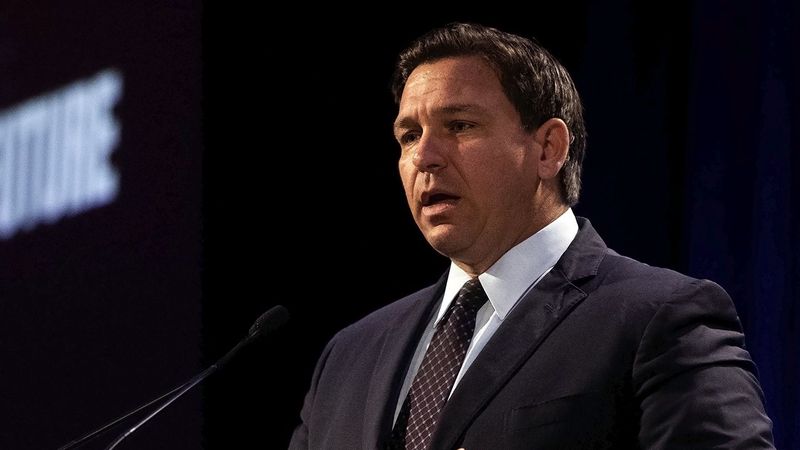 After months of getting the cold shoulder from large corporations who refused to endorse his COVID-19 policies, Gov. Ron DeSantis had harsh things to say Thursday at the annual meeting of the Florida Chamber of Commerce, blasting what he called “the rise of corporate wokeness.”

“If you’re using your power as a corporation, and you’re leveraging that to try to advance any ideology, I think it’s very dangerous for this country and I’m not just gonna sit idly by,’’ DeSantis warned as he presented the keynote speech to the audience at the Hyatt Regency Grand Cypress resort in Orlando.

In the rambling 30-minute speech, DeSantis warned the business audience that he has no tolerance for corporations that use their influence for political messaging.

“Do you want to be more of a political actor or more of a business actor?’’ he asked, chastising the decision by Major League Baseball to pull its All-Star game out of suburban Atlanta after Georgia passed new election rules intended to make it harder to vote in the state’s urban areas.

“Don’t ever think that caving to the mob is going to save your bacon,’’ DeSantis said. “That’s just going to cause them to come back more.”

He then warned that such behavior from companies will elicit a rebuke from politicians like him.

“You know, if you do it, you are also going to come by some people on the other side, like me, who are going to say well, wait a minute, if you’re going to criticize what we’re doing I may criticize some of the things you are doing,’’ he said.

“I may look under the hood and not like some things,’’ he warned. “I got a podium. I got cameras that will follow me around. Maybe I’ll go talk about that a little bit. And so, I think it’s something that’s very damaging.”

DeSantis, who has said he is running for re-election but has yet to file the paperwork, did not mention that his political committee has raised more than $50 million, including millions from individuals and companies associated with the nation’s largest corporations or that the chamber event was sponsored by some of the state’s biggest companies.

“I think corporate America has lost so much [support],” he said. “Most [Republican voters] hate corporations now,’’ he said. “They hate them because they see these big companies that are really kowtowing to a very elite ideology and an ideology that’s not reflective of the vast vast majority of the country.”

DeSantis specifically called out the U.S. Chamber of Commerce, whose membership includes the Florida Chamber, over a survey it issued this week showing that 64 percent of small business owners support businesses in their area requiring vaccines for their employees.

“Republicans up there won’t even meet with them anymore,’’ he said. “I mean, like, they’re not even a part of the conversation, and nor should they be, quite honestly.”

Mark Wilson, president and CEO of the Florida Chamber, did not respond to requests for comment nor did others who were in attendance. The speech was live-streamed by the chamber for participants and reporters who could not attend the sold-out event.

The governor gave his speech just hours after announcing the state had filed a lawsuit against the U.S. government Thursday, challenging the rule requiring companies that are federal contractors to show proof of vaccination to most of their employees.

The governor’s opposition to vaccine mandates has received a tepid response from businesses across the state, many of whom have used incentives and mandates to restore confidence about the safety of their workplaces for employees and customers.

Wilson told the Times/Herald last week that his members have “always been against government mandating what business can do and can’t do.” He said that although the chamber is “very interested in the conversation” over a special session, “we’re not asking for legislation.”

In his comments before the chamber crowd, DeSantis resurrected many of the lines he has used at press conferences in which he attacks efforts to slow the spread of the coronavirus through the vaccine and mask mandates.

“It started as 15 days to slow the spread. Now we’re at three jabs just to keep your job,’’ he said, referring to former President Donald Trump’s line at the onset of the pandemic and the Biden administration’s push to get Americans vaccinated. That line has drawn applause at press conference stocked with his supporters, but at the chamber event it was greeted with silence.

Among the sponsors of the event are corporations, such as Google, that requires all employees to be vaccinated. Jacksonville-based Nemours Children’s Health, another sponsor, has not only required COVID-19 vaccinations for all associates as term of employment, its policy led to the layoffs of 127 people throughout its system as of Oct. 6.

Other sponsors, such as Fidelity Investments, strongly encourage vaccinations. Bank of America said it doesn’t have a vaccine mandate but also strongly encourages all employees to be vaccinated and inform the company of their status.

Florida Gulf Coast University, another sponsor of the event, does not require COVID-19 vaccinations for students or employees, said Pamela McCabe, head of media relations for the college.

“While we don’t have a policy, FGCU is not neutral on vaccines. FGCU believes everyone who is medically able to get vaccinated against the COVID-19 virus should do so,’’ she said. “And we believe those who are fully vaccinated are less likely to face serious illness, spread the virus to others, or be required to miss class, work, research, athletic events and on-campus activities due to illness or quarantine.”

Joe Marino, spokesperson for Veterans Florida, a non-profit created by the State of Florida to help military veterans transition to civilian life, does not have an employer vaccine mandate.

“Regarding the governor’s speech, we have no comment other than the forum allows us an opportunity to reach employers and workforce thought leaders in Florida’s business community to open new avenues for veterans’ career advancement,’’ he said.

On Friday, DeSantis made good on his promise to call a special session to penalize employers who require employees to be vaccinated to keep their jobs and set Nov. 15-19 for lawmakers to convene.

“Your right to earn a living should not be contingent upon COVID shots,” DeSantis said in a statement.

The governor received only two rounds of applause during the address, once when he spoke about working to get more goods to market by resolving the pandemic-related supply chain hurdles, and when he said that high schools should offer apprenticeship programs for trade skills.

DeSantis criticized the state’s public and private universities, saying they “have not delivered on what they should be doing” and promised to “put a premium on workforce education and skills-based training and try to be No. 1 in that by the end of the decade.”

He described Florida as a “refuge” away from communities that have more intensive COVID-19 restrictions as well as a destination for people to relocate.

“I’m not like begging for people, because I think the people we have are wonderful,’’ he said, explaining that the principal reason people have to moved to Florida has less to do with its absence of an income tax and has more to do with his COVID-19 policies and the “culture of lawlessness” that developed elsewhere during the racial justice protests in the summer of 2020.

“Your tax rate ain’t even close to as important as whether you and your family are safe,’’ he said. “So people are seeing that, and that was the final straw for a lot of people.”

He mentioned his $5,000 signing bonus offered to law enforcement officers who transfer to Florida from other states.

“I think you’re gonna see a lot of people take us up on that offer, because I think they realize that their quality of life’s better. They’re going to be treated a lot better,” he said.

He compared the budget of the state of New York and that of Florida and said Florida’s roads and education are ranked better “by a country mile.”

He predicted that as the delta variant infects more people during the winter months, they will have the same surge in cases that Florida had in the summer months.

“Hopefully, you know, it doesn’t come to that, but I think it will, and they’re gonna drive even more people here,’’ he said.

DeSantis was introduced by Chas Bailes III, CEO of ABC Fine Wine & Spirits and chair-elect of the Florida Chamber board of directors.

Bailes said the under the governor’s leadership, “the state of Florida has emerged from the pandemic with an economic momentum that is the envy of every state in the nation” and noted that it has recovered thousands of the jobs lost in the pandemic and in September alone “again outpaced the nation, creating more than 84,000 of the 192,000 jobs created nationally.”