Stocks whipsaw to extend streak of volatility amid Fed update 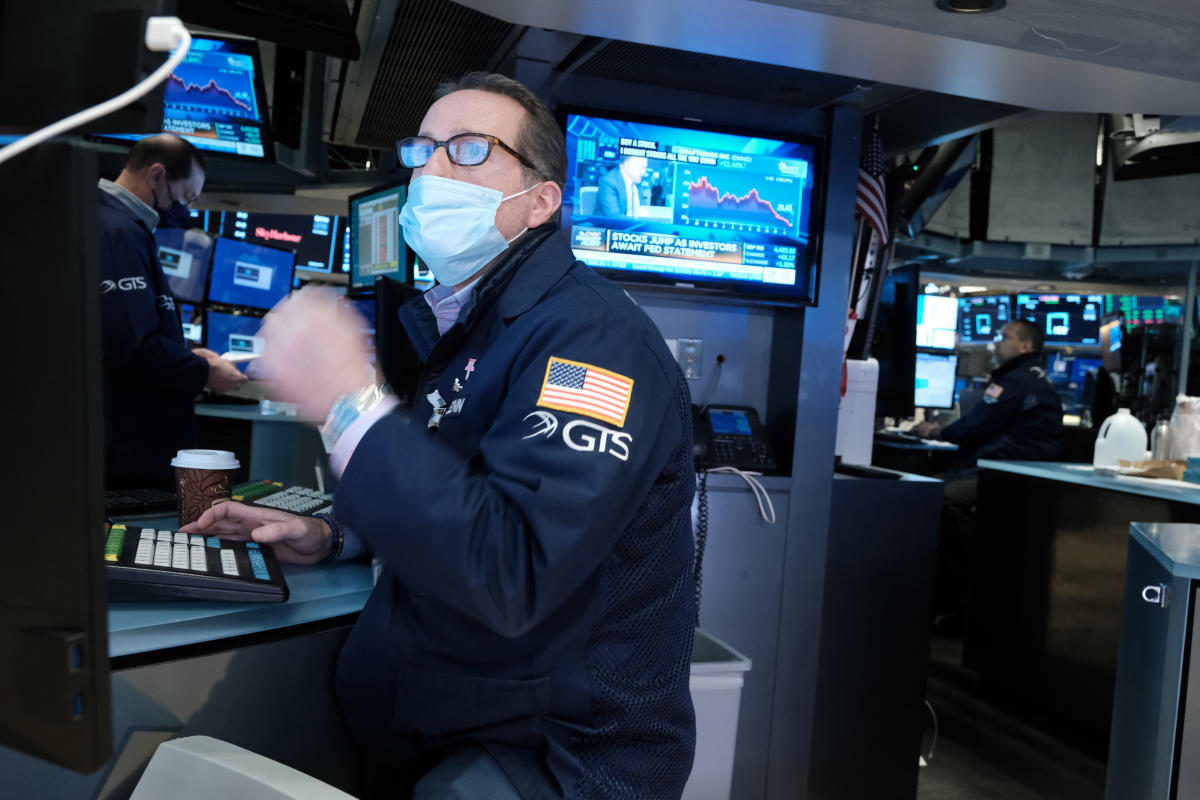 The Dow Jones Industrial Average ended just below its flatline, losing steam from earlier gains, while the S&P 500 closed down 0.54%, also retreating from earlier in the session. Declines in heavily-weighted Tesla (TSLA) dragged down the Nasdaq to close 1.4% lower.

Despite notching a quarterly profit and sales well above analyst estimates for the fourth quarter, shares of Tesla closed down 12% to the lowest level since Oct. 14 after the electric vehicle maker admitted supply chain woes were likely to strain operations and halt new vehicle launches this year.

U.S. gross domestic product (GDP) ramped up in the final months of 2021 at a better-than-expected 6.9% annualized rate in Q4, up from Bloomberg economists’ consensus estimate of 5.5%. Meanwhile, first-time unemployment filings ticked lower for the first time in four weeks after notching a three-month high in the previous reading, suggesting some of the Omicron-related disruptions that have recently weighed on the labor market’s recovery may be easing.

Fed Chair Powell “has to walk a very thin line, a very thin tightrope between not choking off the economic recovery, which does appear as though it’s happening pretty well, but at the same time fighting off inflation,” F.L. Putnam portfolio manager Ellen Hazen told Yahoo Finance Live.

The Federal Reserve held rates at near zero following a two-day policy meeting that concluded on Wednesday, citing plans to halt pandemic-era policy of asset purchases first. The Federal Open Market Committee, however, reaffirmed it will wrap up the process in early March, suggesting the first rate hike could come in six weeks.

Investors had been anticipating clarity from the Fed on measures it would take to mitigate inflation leading up to Wednesday’s statement, with uncertainty around the pace and extent of policy change weighing on markets since the start of the new year.

“While offering some clarity on how the Fed would begin the process of removing policy accommodation, the outcome of the meeting fell short in providing the needed guidance on the timing and magnitude of the shift in policy,” Charlie Ripley, senior investment strategist for Allianz Investment Management said in a note. “Today’s meeting has market participants fully convinced that a March hike is certain, but with Chairman Powell not making any timing commitments, the door is slightly open for a slower moving Fed.”

While questions around when — and how profoundly — short-term borrowing costs will be increased, the Federal Open Market Committee unanimously agreed that “it will soon be appropriate to raise the target range for the federal funds rate,” with remarks from Federal Reserve Chair Jerome Powell signaling the first increase will happen on March 16, after the central bank’s next scheduled meeting.

“I would say that the committee is of a mind to raise the federal funds rate at the March meeting, assuming conditions are appropriate for doing so,” Powell said in a press conference.“I don’t think it’s possible to say exactly how this is going to go, and we’re going to need to be, as I’ve mentioned, nimble about this.”

Powell deflected questions about whether a 50 basis point hike was on the table, including one posed by Yahoo Finance’s Brian Cheung about whether hikes would be gradual, but Powell indicated that the central bank’s moves could differ in tempo from when it began raising rates in 2015 due to the notably stronger economy and labor market and inflation running hot.

“While remaining noncommittal, Powell clearly wanted to indicate that hiking at consecutive meetings was a possibility, a risk we’ve also been flagging,” Feroli said.

Here were the main moves in markets as at the end of the session:

Gas for February delivery spiked 72% suddenly in afternoon trading, reflecting the biggest jump on record, according to Bloomberg.

The move could be a sign of bearish wagers being squeezed out of the market ahead of cold weekend weather, Bloomberg indicated. Today is the last day this particular contract trades before expiring.

A CME Group spokesperson confirmed the price jump to Bloomberg. The increase represented the biggest surge since the contract launched in 1990.

Despite notching a quarterly profit and sales well above analyst estimates, shares of Tesla were down 8% in intraday trading Thursday after the electric vehicle maker admitted supply chain woes were likely to strain operations and halt new vehicle launches this year.

“Our own factories have been running below capacity for several quarters as supply chain became the main limiting factor, which is likely to continue through 2022,” Tesla said in a shareholder deck.

Here were the main moves in markets in midday trading:

“Top line was generally strong for MCD in the 4Q, but perhaps not surprisingly, elevated operating costs weighed on company-operated restaurant margins,” RBC analyst Christopher Carril wrote in a note.

Pending U.S. home sales, which serve as a a leading indicator of the health of the housing market, fell for the second straight month in December.

The National Association of Realtors’ (NAR) Pending Home Sales Index, which tracks the number of homes that are under contract to be sold, dropped 3.8% in the last month of 2021 from November and declined 6.9% from the same month a year.

Activity was down across all regions in the U.S. Bloomberg consensus estimates reflected an expected 0.4% decrease in sales from a month earlier and a 4% drop from the same month a year ago.

9:30 a.m. ET: Stocks advance on back of strong economic data

Here were the main moves in markets at the start if Thursday’s trading session:

U.S. capital goods were unexpectedly unchanged in the month of December, signaling a slowdown in business spending on equipment amid shortages.

The Commerce Department said on Thursday that the unchanged reading last month in orders for non-defense capital goods excluding aircraft followed a 0.3% gain in November. The print serves as a closely-watched proxy for business spending plans.

Economists had anticipated orders to tick up 0.4%, according to Bloomberg consensus estimates.

The Bureau of Economic Analysis reported on Thursday that the U.S. economy expanded at a better-than-expected 6.9% annualized rate in Q4, up from Bloomberg economists’ consensus estimate of 5.5%.

Growth in the fourth quarter rebounded more than expected from the third quarter’s disappointing rate of expansion, when GDP rose at a 2.3% annualized rate — its slowest since mid-2020.

8:30 a.m. ET: US jobless claims trend down as Omicron disruptions begin to ease

First-time unemployment filings ticked lower for the first time in four weeks after notching a three-month high in the previous reading, suggesting some of the Omicron-related disruptions that have recently weighed on the labor market’s recovery may be easing.

Even as Omicron’s spread may be slowing, payrolls will be a bit slower to respond to falling COVID cases than the real-time activity data, according to Pantheon Macroeconomics Chief Economist Ian Shepherdson.

Fourth quarter results from Southwest Airlines Co (LUV) reflected the Texas-based carrier notched its first quarterly profit in two years in the last three months of 2021, buoyed by holiday travel before the Omicron outbreak. The company also said it expects to be profitable in 2022.

Southwest, however, anticipates a loss in the current quarter through March due to repressed revenue gains and increased costs related to disruptions from Omicron. The airline expects to be profitable in the remaining three quarters of the year.

“With COVID-19 cases trending downward, the worst appears to be behind us,” incoming CEO Bob Jordan said. Jordan is expected to assume his post as the company’s sixth chief executive next month.

Shares of Southwest were mostly flat in pre-market trading at $43.77 a piece.

7:00 a.m.: Futures on all three major indexes seesaw ahead of open

Here were the main moves in post-market trading ahead of the overnight session: